The Hebrew word for jam or jelly, ribah ריבה, was coined by the father of modern Hebrew, Eliezer Ben-Yehuda. On that, everyone agrees. However, there has been debate over how he came up with the word, and if it was a good choice. Let's look at its history.

As Elon Gilad writes, the first mention of ribah was in a column by Ben-Yehuda in his newspaper, HaZvi, in 1888. To show that this was not a coinage out of whole cloth, he titled his piece "A new word that is old." Gilad summarizes Ben-Yehuda's justification for choosing the word:

In the article Ben-Yehuda set out to show how he found the word riba in the Jerusalem Talmud (Shekalim 7:9) in a passage concerning the frying of a dish call tofini. What exactly this tofini is is not at all clear, but that’s besides the point. We find a bunch of rabbis seemingly debating the recipe, when one of them says tofinei riba. Ben-Yehuda acknowledges that commentators wrote that this was a copying error and that originally the text said raka, which means “soft” - meaning that the dough was half done.

Ben-Yehuda concludes that the word riba comes from the root r-b-b and that this root means, as it means in Arabic, something condensed by heating. It's a root that gave Arabic the word murabab - jam. “Thus, we gained a new word that is old for a kind of sweets, for the kinds of fruit cooked in sugar, in honey, and it is riba,” Ben-Yehuda concluded.

However, looking at the original text of Ben-Yehuda's column (page 4), I think Gilad's explanation could use some clarification. Here's what Ben-Yehuda wrote: 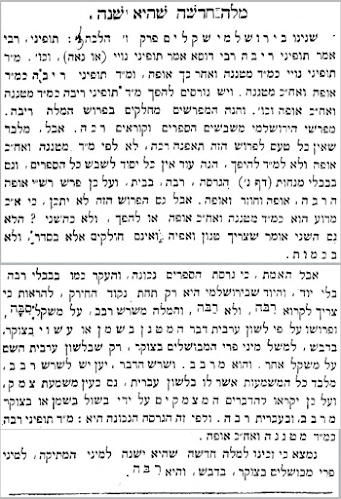 My understanding is that Ben Yehuda claimed that those who felt the text should read raka רכה were in error. He relies on the parallel text in the Babylonian Talmud (Menachot 50b) which has the word with a bet - raba רבה. He relies on Rashi's explanation on the passage in Menachot, which says that raba means "a lot", so it should be baked more than once.

But then he goes on to reject that approach as well, and says that the word should be read as riba ריבה, not raba, according to the the text in the Jerusalem Talmud. And for this he quotes the Arabic cognate.

As Klein writes, the Arabic verb rabba means "he reared, increased, originally 'he made thick or dense,'" and rubb means "thickened juice of fruit", which led to mirabb - "jam, preserved fruit."

And so Ben Yehuda concludes that this is how he understands the Talmudic passage - the tofini is not repeatedly cooked, but rather made thick by cooking.

Ben-Yehuda's coinage, and particularly his interpretation of the text in the Talmud, aroused the ire of another pillar of modern Hebrew - the writer S.Y. Agnon. In his 1943 novel Shevuat Emunim ("Betrothed"), Agnon writes about pre-World War I Jaffa, and says that in the evenings they would drink tea and eat preserves, and then adds:

If some intellectual were present, he would make fun of the hotel-keeper who had misunderstood a Talmudic word, and called fruit preserves 'jam.'

This was clearly a jab at Ben-Yehuda. Not only does Agnon say that it is a mistake to call preserves (for which he uses the older word mirkahat מרקחת), but he refers to him as a "hotel keeper." In the Hebrew, that phrase is baal hamalon בעל המלון. Ben-Yehuda was the author of the first modern Hebrew dictionary, and so could have been known as the baal hamilon בעל המילון (literally, "master of the dictionary.") But Agnon rejected Ben-Yehuda's switching raba for riba in the Talmudic passage, and made the same vowel switch back from milon to malon.

Many have also criticized Ben-Yehuda's rejection of the scholars who claimed that the word in Shekalim should be read raka. According to them, that word represents the more accurate texts of the passage (as well as the text in Menachot). And perhaps for that reason, when Ben-Yehuda's dictionary was published after his death, neither the entry for riba, nor the notes by Tur-Sinai mention the Shekalim passage at all, but rely entirely on the Arabic cognate, and other medieval Hebrew words based on the same root: 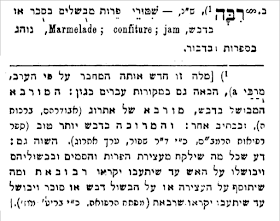 We've now shown Ben-Yehuda's original justification for choosing riba for jam, and the revised explanation in his dictionary. A third report, found often in Ultra-Orthodox circles (who in his lifetime and even today don't have much respect for Ben-Yehuda), attributes Ben-Yehuda with a poor understanding of basic Talmudic terminology. There are a few different versions, but they generally say that he read a passage like this:

and from it coined the word ribah. If that were so, it would indeed be a gross misreading of the text. The phrase mai ribah is found in a number of Talmudic passages (for example Sotah 16b), and means, "What does it include?" This is because ריבה riba in this case literally means "an extension of scope, widening qualification". So while the passage really meant "What does [this case] include? Sweet things", Ben-Yehuda thought it meant "What is riba? Sweet things", and so used it to refer to jam.

The problem is not only as we've seen did Ben-Yehuda not use that passage as his reason for the coinage, but there is no such passage anywhere in Talmudic literature (nor is there for any of the variants of this story). It's rather ironic that people who are trying to make fun of Ben-Yehuda for not understanding the Talmud are actually proving their own ignorance instead. They should really leave the satire to people like Agnon...

I was recently asked if there is a connection between the English word "cameo" and the Hebrew word קמיע kamea - "amulet."

If that seems like a strange suggestion, perhaps you aren't familiar with the background of "cameo." While today it usually means "a small theatrical role usually performed by a well-known actor and often limited to a single scene," that's not the original sense. (Modern Hebrew also has hofa'at kamea הופעת קמע meaning a "cameo appearance, but that is a much more recent usage.) The original sense can be found in this entry from the Online Etymology Dictionary:

early 15c., kaadmaheu, camew, chamehieux and many other spellings (from early 13c. in Anglo-Latin), "engraving in relief upon a precious stone with two layers of colors" (such as onyx, agate, or shell) and done so as to utilize the effect of the colors, from Old French camaieu and directly from Medieval Latin cammaeus, which is of unknown origin, perhaps ultimately from Arabic qamaa'il "flower buds," or Persian chumahan "agate."

In 19c. also used of other raised, carved work on a miniature scale. Transferred sense of "small character or part that stands out from other minor parts" in a play, etc., is from 1928, from earlier meaning "short literary sketch or portrait" (1851), a transferred sense from cameo silhouettes. A cameotype (1864) was a small, vignette daguerreotype mounted in a jeweled setting.

Since cameo originally meant a type of jewelry, that's much closer to the sense of "amulet." Yet, none of the suggestions mentioned in this entry can be connected to kamea. (I haven't been able to find any Hebrew cognate to the qamaa'il referenced above. In fact, the claims is disputed entirely in this article, saying that qamaa'il is not found in Arabic dictionaries.)

However, that doesn't mean a connection isn't possible. Let's first look at the origin of kamea, to see if it can bring us closer to cameo. (Ben Yehuda points out that the original pronunciation was kamia, but the transition to kamea may have been from the Italian "cameo.") Here's Klein's entry:

And while he doesn't directly link the two, a connection between kamea and the root קמע is likely. He had said that kamea is related to an Arabic root meaning "tamed" or "bridled", and here is his entry for קמע:

קמע to bind, tie up.

To bridle is to tie up a horse with reins, so I can see a connection between kamea - "bridled" and קמע - "to tie up." An amulet, as jewelry, is also "tied up" to the wearer, so all of these meanings appear to be related. (Kohut, in the Aruch HaShalem, entry קמע, points out that just as the Greek word for amulet, periamma, comes from amma, "knot", so too does kamea come from קמע, "to tie.")

He then goes on to say that kim'ah קמעה - "a little" may also derive from the same root:

(We discussed the Hebrew equivalent קמץ kamatz in this earlier post.)

Kim'ah is the root of the modern Hebrew word kim'oni קמעוני - "retail", just as the English word retail originally meant "to sell in small quantities."

All this is nice, and would seem to point us in the direction of a connection between kamea and cameo, but as we've seen many times here before, words that appear to be connected do not necessarily share a common origin. There are sources out there that say the two are directly connected, but do not offer any proof.

However, I did find one, admittedly older, theory that ties the two words together. There was a claim, mentioned in early editions of the Encyclopedia Britannica, that cameo derives from the Arabic kamea, "amulet", which would clearly be cognate with the Hebrew. For example, this is in the entry from the 1902 edition:

The word cameo is generally regarded as being derived from the Arabic camea, a charm or amulet

But as this article points out, the word camea was not found "with this significance in the Arabic dictionaries" and "in all probability, the writer of the Encyclopedia Britannica thought of the Aramaic camea." It also notes that later editions of the encyclopedia dropped that etymology.

That's certainly possible. I did find a number of mentions from 19th century books that also mentioned an Arabic form of camea, but it's possible they were all mistaken separately or influenced from one source that mixed up the Aramaic and Arabic.

But that doesn't make me think that an etymology is unlikely. We've seen relevant cognates in a few Semitic languages, and all the meanings seem related to the same sense of "amulet." If a more convincing etymology for cameo is found, then we can perhaps drop the connection to kamea. But for now, it still seems like a reasonable proposition.