Yesterday I wrote about tuna, and one of the most popular kinds of tuna is albacore. Today, not only will I show that albacore also has a Semitic origin, but I will even connect it to this week's parasha!

Klein, in his CEDEL, has the following entry for albacore:

Hebrew also has בכר becher meaning "young camel" as in Yeshayahu 60:6 - בִּכְרֵי מִדְיָן . I'm not sure of the connection between tuna and camels. The Online Etymology Dictionary has the following:

1579, "large variety of tuna," from Port. albacora, from Arabic al bakara pl. of buko "young camel, heifer," the fish so called for its size.

I wonder if perhaps the larger dorsal fin seemed like the hump of a camel: 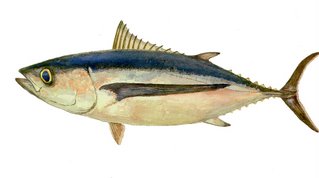 Back to the root בכר. I've always had a hard time remembering whether the plural for first-born in Hebrew is בכורים or בכורות - as in the Fast of the First-Born before Pesach: is it Taanit Bechorim or Taanit Bechorot? Steinberg writes that bechorim applies to people, and bechorot applies to animals - I assume he's limiting that distinction to Biblical Hebrew.

Klein writes that the root בגר - "to grow up, mature", is probably a collateral form of בכר .

Both Jastrow and Steinberg connect בכר with בקר - "to break forth, be early". Stahl also discusses this in relation to the Arabic word for tomorrow - bukra, which he spells in Hebrew בוכרה. He writes that bukra is connected to בכר - "to be early", and there are those that connect it to boker - בוקר - morning as well. He points out that in many languages there is a connection between "morning" and "tomorrow" - including English, where "tomorrow" means "on the morrow" - in the morning.

I'll finish up with a cute story from about five years ago:

We were talking to our five year old daughter about the story of Yaakov and Esav, and why it's good to be a "bechor" בכור (firstborn). Our three year old son was listening, and then said "It's dark. But it's quiet." We had no idea what he was talking about, until we realized he thought we said what was it like to be "b'chor" בחור -- in a hole.
DLC at 7:17 AM
Share